Virtual Assistants and the New Age of Computing

In 1979 Steve Jobs visited Xerox PARC, a legendary R&D lab in California’s famous Palo Alto tech centre. There he saw a demo of what became the “Graphical User Interface” or GUI. GUI is how all computers work today. You use icons, drop-downs and “windows” to create, destroy and mess around online.

What Mr. Jobs didn’t see on his visit to Xerox was the “Conversational User Interface” or CUI. The scientists behind the CUI believed that we should be able to work with our computers by vocalizing commands in ordinary human language.

At the time they recognized that to introduce this product they would require faster, more distributed processing and smarter, more efficient computers.  At the time they developed a prototype, but to industrialize it would cost far too much. Nowadays, nearly every major tech company—from Amazon to Intel to Microsoft to Google—is chasing the sort of CUI developed by Xerox decades ago.

Although voice interfaces are not new, they’ve been pretty dumb to this point. Siri can do basic searches, but isn’t capable of anything complex, and when pushed it will send you to a google search.

Some of the products on the market already are quite simple, but a company named Soundhound has developed an application called Hound in secret for 10 years that is far from basic. You can ask Hound something as complex as: “What is the population and capital for Japan and China, and their areas in square miles and square kilometers? And also tell me how many people live in India, and what is the area code for Germany, France, and Italy?” Hound can analyze the input and return a correct answer to EVERY question.

This doesn’t mean that the GUI interface will disappear. Far from it. If you use your computer to design, write, or create, it’s likely you’ll continue to use your computer in similar ways. What it really means is that younger and older generations, and the disabled community will have a better way to communicate with their technology.

Many tech executives believe that the GUI has gone as far as it can and is becoming increasingly overloaded. Average business users nowadays may have 5 Word docs, 2 Excel spreadsheets, and 20 tabs open, all at the same time. That’s where the CUI comes into play. It acts as a liaison between apps that generally wouldn’t talk to one another. This smooths communication and allows tasks to be completed without requiring you to flip through several different programs. 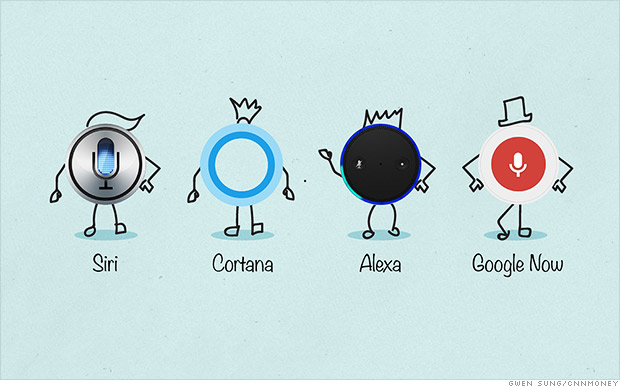 Google has Siri, Amazon has Alexa, and Google has Cortana, so it’s only a matter of time until these voice recognition technologies can handle ordinary human language easily. But remember, like any assistant, these virtual assistants need to learn your habits to become seamless. The digital assistant revolution may be closer than it appears!