Why is my #%[email protected]^&# computer so slow? 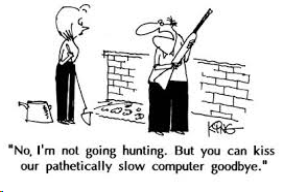 That question is all-too-common these days. That shiny, brand-spanking-new computer seemed to fly when you first got it. Now, six months later, it’s maddeningly slow, and everything seems to take forever.

What changed? Why does this happen? And why does it happen to every computer you own?

Unfortunately there isn’t a single, simple answer. There are a variety of possible causes, and each of them requires different solution. Here’s a partial list:

But what if none of the above helps? Once in while we run across a computer that’s so badly behaved that none of the above solutions solve the problem. If that happens, the only option is to backup your data, reload the system and restore the data and software. Unfortunately, that process takes several hours.

Did we say that reloading is the only option? Actually, there’s one more: buy a new computer! Seriously, if your computer is more than 2.5 years old, investing time in reloading it is a waste of money. New computers are inexpensive and will give you much better performance. Now there’s some food for thought!

The 7 Urgent And Critical Protections Every Small And Medium Sized Business Must Have In Place NOW To Protect Their Bank Accounts, Client Data, Confidential Information And Reputation From The Tsunami Of Cybercrime